You are more than just a client to us, and our significant repeat clientele speaks to the relationships we have built over the years. We want our clients to have a great experience and we do our best to exceed their expectations. Word of mouth is our best advertisement and building lasting relationships is of great importance to us.

Cardrona Alpine Resort & Cook Brothers have been working together since 2016 on various projects within our base buildings revamp, and Project Alchemy.

Our site is never an easy place to operate & construct, however, the team at Cook Brothers have taken the challenges of our alpine environment & operating windows in their stride. Always aiming to please, their staff are engaging, co-operative & have embraced our company values & sustainability ethos with enthusiasm.

Our new ticket office is something the entire team can be proud of and we look forward to future projects with Cook Brothers Construction. We have just completed a new design and build in Cromwell with Cook Brothers Construction. The project from start to finish has to be our smoothest build to date. After dealing with a number of construction companies on multiple jobs, Cook Brothers would rate as one of the best,

I have no problem recommending the team at Cook Brothers.

We found the Cook Brothers team to be diligent and professional at all times. Both the projects were delivered in a professional and timely manner. The Cook Brothers team maintained a strong working relationship with all consultants throughout the projects, generating a robust team structure which ensured excellent finished products for the client.

We would certainly have no hesitation in working together with Cook Brothers again in the future if the opportunity arose. 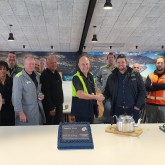 Your team from Cook Brothers, along with your contractors, were a pleasure to work with. By everyone being able to be flexible, we had minimal disruption to production and delays.
We now have a facility we can be proud of (and dry) to carry out our business going forward.

All the best on future projects. Oakley Gray Architects worked with Cook Brothers in a design-build joint venture on the new Medical Centre and Resthome for West Otago Health in Tapanui, having successfully won a limited competition. The project was carried out from 2012-2014.

There was an excellent working relationship between the architect, contractor and the client throughout the project. The community had been fundraising for many years prior to construction, and so a keen awareness of budget constraints was paramount. Value engineering was carried out at key milestones, and Cook Brothers were very proactive in suggestions around saving money. Their project management was good, and the construction quality was excellent.

We found Cook Brothers very good to work with and would recommend them to others.

We have recently worked with Cook Brothers Construction on a $2.6million refurbishment of The Gate Restaurant/Bar and Cafe/Info Centre in Cromwell and a $100,000 commercial fit out for Ocula Optometrists in Queenstown. For both projects, CBC were engaged in Early Contract Involvement. For The Gate, they competitively tendered for rates and margins.

Having CBC involved at an early stage for these projects, allowed them to provide the design team with comments on the construction, sequencing/programming, and line up subcontractors to quote as both projects had tight timeframes. During the early design meetings, CBC were able to give input on comparative costs for design elements to present to the client.

Input was received from the Regional and Divisional Managers for The Gate project prior to site commencement. This was beneficial in building a relationship with the team and opening lines of communication. For Ocula the Project Manager was also involved from the start. We believe this is beneficial and adds another valuable layer of expertise for both large and small projects.

We would recommend that having CBC on board for Early Contract Involvement is beneficial to a positive project and developing a good working relationship.

If you would like to discuss this further please phone.